Like any hobby, to a newcomer, airgun shooting can seem like a minefield of terminology, confusing phrases and niche information which can make it difficult to learn the ropes. Airgun shooting is absolutely no exception to this. One confusing thing you may be finding is the different kinds of airguns and which one is better than the others.

Now like most things, there’s no outright “better” airgun type. If there was, that would be the only kind on the market. Each kind of airgun has benefits to its design and power delivery which may or may not be beneficial to how you intend to use it.

There are 4 main kinds of airgun.

This is what most newcomers think of when they think about an air rifle. A spring piston airgun works with, as the name suggests, a spring and a piston. The piston is drawn back to compress the spring. When the piston is released, it’s pushed forward by the spring and this forces compressed air and the pellet out of the air rifle.

Commonly, this is in the form of a “break barrel” airgun, similar to how to how some shotguns “break”. This is not actually breaking the rifle, rather bending it on a hinge, giving you access to the barrel to reload. However, the purpose of breaking the barrel of an airgun is not only to access the chamber and reload, but to compress the piston and spring inside. This is what charges the air rifle and why it takes some force to do so (you’re compressing a strong spring).

However, not all spring-piston air rifles use this method. Some rifles simply have a lever to compress the piston known as an “under-lever” air rifle. This is very similar to using the barrel, however it allows the barrel to remain fixed. This increases accuracy and reliability as it prevents the barrel from becoming misaligned.

The simplicity and ease of maintenance with this type of air rifle means that it’s a favourite with many shooters. The entire spring piston mechanism is not only very reliable, but it’s highly consistent, producing accurate enough results for most people. The break action or lever action of the rifle is also highly satisfying and quick enough for most “general use” purposes besides live quarrel, as follow up shots take time.

It’s worth noting, however, that the force of the piston moving within the rifle is known to affect accuracy adversely, if you’re looking for the best accuracy possible, like competitive target shooting, it’s better to avoid these types of rifle. 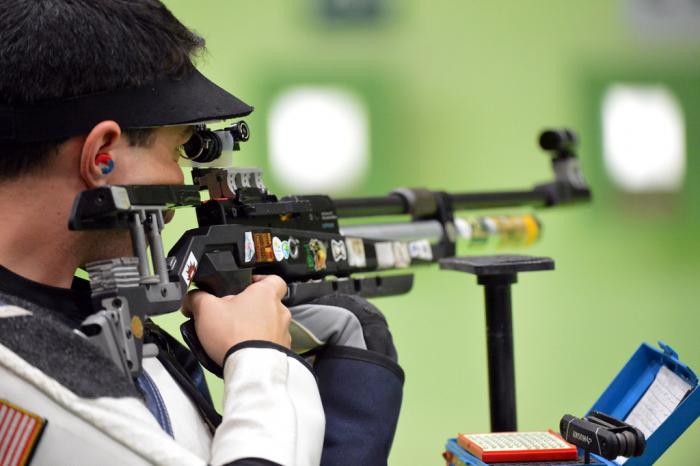 The next kind of air rifle that you may be familiar with is a Pneumatic airgun.

A Pneumatic air rifle has a reservoir of gas inside it, ready to be released to force a pellet down the barrel. This tank gets refilled in different ways depending on the kind of air gun it is. Some may use a “pump” action to slowly increase the pressure inside the tank until it’s sufficient. This is what’s known as a “multi-stroke”, for obvious reasons. These multi-stroke pneumatic air rifles are the least accurate of their kind. The pressure within the tank varies depending on how many times it’s pumped, resulting in in-consistent accuracy. Not only this, but the time it takes for a multi-stroke to be filled can be quite time consuming, particularly if attempting to shoot at live quarrel.

The next type is a “single-stroke” pneumatic air rifle, which as the name suggests, only takes one pump to charge. As you may imagine, this is much harder to do, but provides better consistency when compared to the multi-stroke variants on the market. Many high end 10-meter shooting rifles employ this form of charging. The mechanism is fast enough to not be a hinderance, whilst there’s next to zero moving mass inside the weapon when firing, resulting in highly accurate and repeatable results.

Single stroke pneumatic air guns may be highly accurate, but they do lack some of the power of other air rifles. If you’re intending to be highly accurate at long ranges, you may want to investigate the next kind.

Pre-Charged Pneumatics (Known as PCP air guns) combine the greatness of “single stroke” air guns with the power and convenience of other types. These air rifles utilise a pre-charges tank of gas, like a paintball or SCUBA tank. The internal tank is filled from an external tank (such as a scuba tank) and is ready to be fired. This means that there’s very little effort involved in loading the rifle and follow up shots can be taken quickly and easily. This is the kind of rifle you should be looking at if you’re interested in shooting live quarrel at longer ranges.

One downside to consider of PCP Air Rifles is that you will need to find a way to charge the internal tanks. This may involve purchasing a SCUBA or Paintball tank which may need to be re-filled at specialist premises for a fee.

All Pneumatic air rifles take a little bit more maintenance than standard Spring Piston types, but they are not too difficult to keep maintained. Some simple lubrication and cleaning practices can be followed to ensure they’re always working well.

A CO2 airgun works very similarly to how a PCP air rifle works, however, instead of utilising an internal air tank which is refilled from an external one, a CO2 air rifle uses a removeable and replaceable co2 bulb. Co2 bulbs are pressurised anywhere up to 900psi in a liquid state, so they pack a lot of pressure into a small package. This allows you to easily refill the rifle with a bulb stored in a pocket, rather than a large scuba tank. When done properly, they can be as accurate as PCP air guns.

However, CO2 is highly susceptible to temperature changes. A drop in just a few degrees in ambient temperature can result in a significant change in the point of impact on your shot. This is something that, when accustomed to shooting with CO2 can be accounted for. Many serious shooters will allow their CO2 bulbs to acclimatise to the local temperature, and then zero their rifle scope to ensure they’re accurate. The only problem with this is tackling temperature changes throughout the day, especially if shooting outdoors.

Gas ram airguns are probably the least common type of air rifle on the market, although quite prevalent. They look and operate very similarly to spring piston air guns. However, instead of compressing a spring for power, it compresses a sealed cylinder of air. This air acts very similar to a spring and when released, pushes against a piston, which compresses air and pushes the pellet out of the barrel.

They were designed to shoot smoothly and easily with less moving internal parts (no spring inside to bind up).

Which one’s for you?

Hopefully you’ll be able to tell from the pros and cons above, which kind is right for your style and uses. However, if you’re still not sure, here’s a little bit of a helping hand.

If you’re looking for a short range “plinker” and not after serious accuracy, just a little bit of fun, you’d be best off going for a multi-stroke pneumatic weapon.

If you’re looking for highly accurate short-range shooting, a “nail driver” some would say, then you should perhaps look into a single stroke pneumatic weapon.

If you’re looking for a medium range, fun to shoot but not ridiculously accurate, you’d have fun with a spring piston rifle.

Read our blog - What Are The Best Air Rifle Pellets?

How to use a speed loader for an airsoft gun

How to best prepare for Airsoft in Cold Weather.