If you’re in the market for a GBB (gas blow-back), you need to know the difference in open bolt vs closed bolt gas airsoft guns.

Now, you might be familiar with the firearm terms, open bolt and closed bolt. If you’re not, you can quickly learn the difference in our blog here. However, when the terms “Open Bolt” and “Closed Bolt” are used to refer to gas airsoft guns, it’s not quite the same as how it refers to firearms.

Most modern gas airsoft guns follow the open bolt design, however there are still a fair number of the older technology “closed bolt” available on the used market. So, if you’re in the market and want to know the difference, this should help you know which type of bolt is for you. 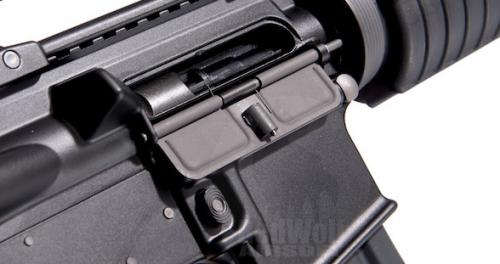 Open bolt is the newer technology and it’s argued to be an all-around better system. However, it does come with its drawbacks.

An open bolt gas airsoft gun has what could be referred to as a more “realistic” operation. The whole bolt moves backward, similarly to a real firearm. This gives the airsoft gun a strong kick when it’s fired. Since the whole bolt assembly moves back and forth, it’s more pleasing to use, the charging handle moves as you would expect, and the gun sounds and feels more authentic.

The open-bolt system, is also better supported by upgrades and spare parts, partly because it’s newer, but also because the hop-up unit in particular uses closer to standard hop-up parts that you may use for other gas weapons, such as pistol or sniper rifles.

However, this system does come with its negatives. The whole (heavy) bolt moves back and forth, and this requires gas to make it happen. Open bolt gas guns have a worse gas efficiency than their closed bolt cousins simply because the gas must do more work.

In addition, since the whole bolt becomes open during operation, there’s a much greater chance for dirt and debris to fall into the action and gunk up its operation. Open bolt airsoft guns generally require more cleaning, care and attention.

The closed bolt system (AWSS) is best described as being “enclosed”. There’s a brass tube that encloses the whole loading nozzle and the bolt does not travel back as far as a genuine rifle would.

On the positive side, the system is less susceptible to debris and dirt entering the assembly and fouling the action. This makes it arguably more reliable. Additionally, since the bolt is lighter and moves less, it requires much less gas to move than in an open bolt system. Comparing the two, a closed bolt airsoft gun is much more gas efficient than an open bolt system.

However, the system does have a number of negatives, which ultimately have let to it being superseded by the open bolt system.

The loading nozzle system is prone to “chopping” BBs during operation. This is where a BB gets caught between a surface and where it should be going, causing the loading nozzle to chop or crush the BB into pieces.

In addition, the closed bolt system used a hop-up that was next to useless. The bucking was tiny, with very little ability to apply backspin to the BB. Here’s how a hop-up works, in case you’re not sure why that’s important. This would overall make a close bolt GBBR less accurate than an open bolt system.

That’s not to say that if you are able to lay your hands on an inexpensive closed bolt rifle that you shouldn’t purchase it. The system is a good system that’s worked for many players for many years but the benefit comes with the fact that a closed bolt systems can be converted into open bolt system with an upgrade kit. This opens up the potentially for a high quality, custom rifle, for a relatively inexpensive price.

Read How a Hop Up Works

How to Clean an Airsoft Gun with Degreasing Spray